Centrepointe is a wonderful place to live, and is a highly sought after location for numerous reasons. The Centrepointe community has seen some of the largest price increases of any area in Ottawa's West end. It has been very popular with new chinese Canadians that favour the area for its superior schools and newer homes. Centrepointe, like Central park, is one of the few planned communities inside the greenbelt that was built in the early 1980’s.  It was old farm land that was originally owned by CMHC and later sold to a collection of developers. The vast majority of the community was built by Minto, but Richcraft, Regional and Valecraft also built large areas of Centrepointe. Its central feature is a 32 acre park, complete with soccer fields hockey rink a large duck pond.

Centrepointe is located just west of Woodroffe Ave, east of the community of Briargreen, north of the train tracks in Craig Henry and south of Baseline road. 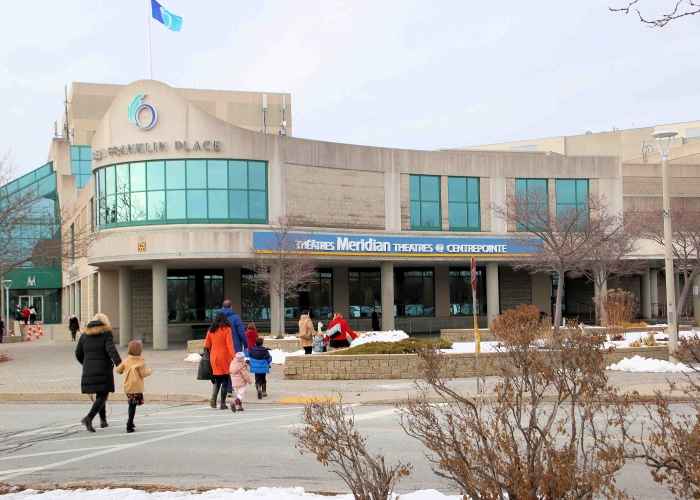 The Centrepointe Meridian Theatre is a popular venue for plays and small concerts.The major appeal to Centrepointe is the central location.  The proximity to the Woodroffe on ramp to the Queensway means that you are for the most part two major exits to the downtown area.The Centrepointe community has many unique features and services that no other community in Ottawa has. Centrepointe features one of Ottawa's largest libraries.Centrepointe Park, at 32 acres, is one of Ottawa's largest public parks.
The pending LRT western expansion to Woodroffe station will make the commute to downtown even more convenient.
The size of Centrepointe park is also a major attraction, as it is an extremely popular place for summer time walks, and recreation.

The pending LRT western expansion to Woodroffe station will make the commute to downtown even more convenient.
Another major reason people like the area is quality of the area schools. Both Briargreen Elementary and Sir Robert Borden Secondary schools area both highly regarded.
The intelligent central design of the road system that features a central boulevard that feeds a series of looped crescents ensures that almost all the streets in the area are virtually traffic free.
Local Schools

What are some of the Centrepointe favourites?
An after dinner walk in Centrepointe park on a hot summer’s eve is a major highlight of the area.
One of Ottawa’s best kept secrets is the Baan Thai restaurant in Centrepointe plaza.
The splash pad and kids playground in Centrepointe park are some of Ottawa’s largest.
With the walking trails to Craig Henry and Briargreen where most kids are still afforded the ability to walk to school.
The pending LRT station at Woodroffe will be underground, which will be a game changer for commuters in Winter months.
The choice of relatively modern home designs available in Centrepointe is also a major appeal.
Family skates at the New Years Eve party at the Old Nepean City hall rink.

Central Park
Central Park is another  highly desirable community in Ottawa's Central West End.  I was developed mainly by Ashcroft Homes in the early 1980's.  The community is themed after New York City with many of the street names reflecting the New York City landmarks. Originally it was a forested lot that was part of the Experimental farm, and was divested in the early 1980's.
Where is it?

Central Park is west of the Experimental Farm on Merivale Rd, south of Carlington, East of Clyde, and north of the large Agriculture Canada office complex on Baseline Rd. The heavy emphasis on green space and public parks makes this neighbourhood appealing to most, especially dog owners.
The emergence of Central Park brought newer homes with open concept designs and unique features like ensuite baths.
Quick access to all the shopping on Merivale road is a huge plus.
The neighbourhood is relatively central to the downtown core with good transit routes to downtown.
Unlike Centrepointe which has a pronounced focus on Single family homes, Central Park is a community focussed around townhomes and stacked homes with a few streets dedicated to Single family homes.

What are the favourites?
Easy bike routes to downtown with relatively little requirement to go on any roads is a huge plus for 2 wheel commuters.
Having your own community Tim Hortons has huge attraction for most.
Dog lovers will enjoy the large parks and quick access to the Experimental farm.
Cat Lovers will love the local Merivale Cat clinic as it is one of Ottawa’s Veterinary Clinics focussed solely on Cat’s.
Catching a Pizza at a local favourite House of Lasagna is a must.